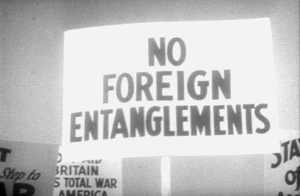 In his farewell address, George Washington, the first President of the United States, warned the leaders of his new country to “steer clear of permanent alliances with any portion of the foreign world.” As a new country, the greatest need was to pay attention to internal priorities which included political stability and economic independence. This political detachment from international affairs was termed unilateralism and was advocated by other Founding Fathers of the United States. Thomas Jefferson, saw this as “the best way to preserve and develop the nation as a free people.” Non-interventionist unilateralism also known as its “policy of aloofness” allowed the United States to become a “great power” by the end of the nineteenth century.

Last month, nerves were rattled on either side of the border when seven Israelis died and 25 others were injured in triple terrorist attacks near Eilat. This was followed by an Israeli incursion into the Egyptian border which resulted in Israel’s killing of five Egyptian soldiers in Sinai.

Since then the media and social networks have been abuzz with popular demands for a formal apology, the expulsion of the Israeli ambassador, a review of the Camp David peace accords with some even calling for an all-out war. The Israeli media also joined the frenzy with calls for a scrapping of the peace treaty, while others demanded a reoccupation of the Sinai Peninsula. Escalation was on the streets as well, where thousands of Egyptian protesters in front of the Israeli Embassy, and many more online, watched as a young Egyptian carpenter climbed up the 21-story Israeli Embassy building in order to replace the Israeli flag with the Egyptian one.

There’s no doubt that things have changed in the Middle East since the return of the Arab ‘street’ as a contending player in the politics of the region. Generally speaking, the more democratic a country is the more complex the foreign policy decisions become both at home and abroad. In such a state popular dissent can affect the outcome at the ballot box or render a government illegitimate. This means neighboring countries, such as Israel, need to factor Egyptian political sentiment into their foreign policy equation. Indeed, many believe that Israeli PM, Binyamin Netanyahu, called a halt to the latest Israeli attack on Gaza out of fear that pushing too hard may sway the upcoming Egyptian vote in favor of the Islamists.

But as a new political actor, falling prey to anti-Israeli rhetoric may not play out well for the protesters and threatens to undermine their very objectives in creating a democratic state that represents their demands. The first danger comes in framing Israel as the common enemy which is at best a distraction and threatens to derail our focus away from the fight to achieve liberty.

Second, it reinforces the Israeli claim to the West that the stakes are too high for democracy in the region and that rather than adapt to the new situation they should fight it. Indeed after the fall of Mubarak, and in the wake of the recent border tensions, Israel and the US are looking for friends within the Egyptian Supreme Council of Armed Forces (SCAF). Recent reports suggest that a scenario in which the SCAF holds on to power would be more favorable to their regional interests. While the SCAF has indicated it does not intend to hang on to power, their view of what constitutes a democratic state has not always coincided with that of the protesters.

The US would prefer a stable Middle East where it can secure friendly relations in a region that contains vital assets and strategic resources. Until recently, this was best achieved by working with and supporting the regions tyrannical rulers. Egyptians need to understand that the threat of Western pressure is serious. As I write this the US Congress has issued a statement making receipt of annual military and economic aid conditional upon continued peace with Israel. While no amount of US / Israeli support were able to save Mubarak, the SCAF have a wide support base in Egypt, if the Abassya demonstration is anything to go by.

This is all happening against the backdrop of continued demonstrations which haven’t stopped since January this year. The reason, quite simply, is that for Egyptians, street protests remain the only available way by which citizens can change government policies. At the same time military trials of Egyptian citizens are on the rise, with reports of some 10,000 citizens in military prisons since the start of the revolution.

But while protests remain legitimate they are a crude way for the people to run their country and they always come at a cost. Understandably, popular support for the demonstrations appears to be in rapid decline. For most citizens protests are measured against their outcome not their intent. To deny the cost is not the same as to justify the cost. Justifying the social & economic costs of a protest confers a sense of responsibility and demands a need for prudence.

The focus and priority of demonstrations needs to be on building the necessary democratic structures that ensure our voices will permeate every government institution and not simply be heard in the corridors of power. Once the people are able to affect decision-making in more ways than simply protesting, their country will become stronger. Egypt currently, has a weak interim government, no President, and a suspended parliament. This has to change in a way that echoes the will of its people.

That is not to say Egypt should forsake the Palestinian cause. But the cause is better served with the people in power rather than on the streets. Nor should Egypt forget about its dead soldiers or its rightful demand for an Israeli apology and investigation into the border incident. But these issues need to be addressed carefully by a government that does not yield easily to external pressure. The success of the Arab transition to liberty depends on it.

11 thoughts on “A New Egypt and Israel’s Border Distraction”