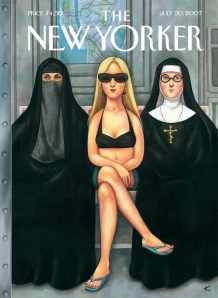 This article, like many others, is a response to Mona El Tahawy’s FP piece

So how do we think about women?

Mona el Tahawy’s Foreign Policy piece, and its sensationalist cover, is by no means the way of addressing it. Neither is an overt apologist way of critiquing her that denies the problem. The point is not to perpetuate the binary of “us the free women who don’t wear the Niqab and are skimpily clad, against the Burka clad women who must be backwards and cannot speak for themselves”. Mona’s opening line from an Arab novel about a woman who is deprived of an orgasm is also not the way to talk about women in the Middle East. If anything Carrie Bradshaw in Sex and the City has taught us that, oddly enough, that problem exists in New York, not just in Harlem, but in the Upper East Side too. It was sad to see Mona talk about women in the Middle East in the same way Hollywood has depicted them as: sexual creates and belly dancers. If anything Jack G. Shaheen’s 2009 book: Reel bad Arabs: How Hollywood vilifies a people is telling how the West views the Arab World. It’s a shame to see Mona fall in that binary as well. This faux pas discourse doesn’t look at the root of the problem, rather becomes a war of labels.

I will never forget an interview I saw about women in Afghanistan talking about the Taliban and how they force women to dress in Burqas. A woman responded anonymously that she doesn’t care if she has to wear 10; the Taliban give her clean water, food and shelter. Mona doesn’t seem to be acutely aware of the socioeconomic plight women in the Arab world go through. Homa Hoodfar, an anthropologist who did fieldwork in Egypt’s urban middle class wrote a book called: Between Marriage and the Market: Intimate Politics of Survival in Cairo. Mona is blind to Hoodfar’s argument about how women in Cairo work two jobs and go home to a household where they work yet again; becoming the central pillar of the household. A brave woman in Cairo, who has a steady salary can divorce and often remarry; shunning her husband and giving him eternal shame. Whether she is veiled or not is irrelevant. This isn’t to negate the fact that women’s status is abysmal; rather it is to show that we should look at women past the classic sensationalist Western lens of: sex, burqas and niqabs.

Through the same lens we can go on to look at the gains women have made, though modest, recently. Be it Tawaqul Karman, Egypt’s blue bra girl who has been an icon and all the out-pour of art directed towards women, new women’s union and the demand to keep Egypt’s Khul’ law (divorce right for women). Though these aren’t the best indicators they are a way of looking at women and what they need.

Then comes Mona’s most startling sin, almost equal to Huntington’s, the way she views Islam as a monolith. She cites multiple examples of how Islam deprives a woman of her rights and subjugates her merely as a sex object; surprising really considering her opening line. It is quite unfortunate to have Mona cite the most fundamentalist examples of Islam. That’s like saying the Tea Party represents ideas of liberty and freedom. Its also the same as saying that Neo-Nazi’s and the far right in the US represent the voice of the American people. Unfortunately, much to the displeasure of many orientalists, there are a multitude of voices in the Middle East. Taking one strand and fixating it then generalizing is a deadly sin (The Seven Deadly Sins of Huntington by Hugh Gusterson in “Why America’s top Pundits are wrong: Anthropologists talk back”).

If Mona el Tahawy wishes to measure women’s rights in the Arab world by sex; then I am sorry to say that the orgasm she is waiting for won’t come. There is a need for a sobering wake-up call for all those who equate sex and sexuality with increased rights. More often than not these self-orientalizing people have not looked at the Arab world’s women and their sexuality. If Mona wants to talk about the LGTB community then she needs to read this: “Man Becomes Woman: Transsexualism in Oman as a Key to Gender Roles” by Unni Wikan. I however refuse to take part in that debate and think the feminist paradigm in the Middle East needs to move on.