Egypt – Neoliberalism versus Liberalism – are they the same? 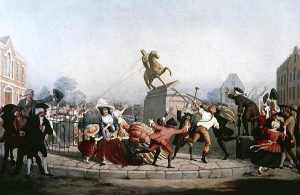 Mubarak’s brand of Liberal economic policies has given Liberalism a bad name. However, Liberals, me included, insist that there is a difference between Mubarak’s economic model, and the liberal economics espoused by the predominant majority of developed countries in the World. I felt that the term Liberalism is not well understood and that a significant amount of confusion surrounds its terminology. To add to the confusion, the term Liberalism encompasses a wide range of views. A simple web search produced twelve different schools of Liberal thought. To be fair, it isn’t only the corrupt policies of Mubarak’s regime or Sadat’s open door polices (al-infetah) that gave Liberalism its bad reputation. The foreign and economic policies of Western Liberal governments such as the United States have lent credence to the concept that Liberal economies are inherently opportunistic. As a result many Leftists have used the terms Liberalism, Neoliberalism, Imperialism, Globalization, Capitalism and sometimes even Corruption interchangeably. But the terms are really quite different. I have, therefore, included a brief glossary of economic terms at the end of this article, but I would like to focus on Neoliberalism, since this is the term most often used to discredit Liberalism.

Liberalism can refer to both a political and economic ideology. As mentioned above, Liberalism embraces a wide range of schools of thought. What these positions have in common is their belief in the core values of constitutionalism, liberal democracy, free and fair elections, human rights, capitalism, free trade, and the freedom of religion. Among the more dominant variants are Classical Liberalism, which became popular in the eighteenth century, and Social Liberalism (Mixed Economies), which became popular in the twentieth century. Classical Liberalism hinges on the belief that a limited role for country’s government is better for its citizens. It is argued that a bigger government is less efficient, anti-competitive and more coercive. In a market economy, businesses and consumers decide what is produced (the supply) based on what they purchase (the demand). In a way consumers determine production decisions by “voting with their dollars”; the more demand there is for a product the more it will be produced. The government does not plan the production or distribution of goods but its role is limited mainly to protecting our life, liberty and property. Various roles that we normally associate with government bureaucracy are better dealt with via voluntary civil society which is regarded as much more effective. Classical Liberalism was the dominant policy that characterized the US and the UK during the 1980s. These policies were dubbed Reaganomics and Thatcherism respectively. These are also the policies most commonly associated with neoliberalism.  Social liberalism (Mixed Economy or Centrism), today constitutes the economic model for most developed countries. Social liberalism is the belief that liberalism should include social justice (a very contentious term). In a mixed economy both market forces and government decisions determine the production and distribution of goods and services. The government does not direct the private sector to produce certain goods and services in certain quantities at certain times but leaves this to supply and demand. However, the government’s influence of the economy stems from its redistribution of wealth. This involves raising money from taxes or borrowing from the private sector (in the form of government bonds), then later redistributing this money to the poor through various forms of welfare or on programs designed to stimulate the economy. Examples would include the economies of Germany, Sweden, France, Italy and even the United States as exemplified by the Democratic Party.

What is Neoliberalism aka the “Washington Consensus”?

Neoliberalism is the belief that Classical Liberalism and free market policies if forced on a global scale would result in a greater good for the greater number and lift the world’s poor to an acceptable standard of living. In this sense it is commonly understood to mean global market-liberalism (‘capitalism’) and often used interchangeably with ‘globalization’. Neoliberalism rose to prominence when it was adopted some 3 decades ago by several Washington-based institutions, including the International Monetary Fund (IMF), World Bank, and U.S. Treasury Department and imposed on developing countries who sought loans. The “Washington Consensus” as it became known listed ten requirements which were named “structural adjustment policies”: [1]

While these policies may or may not be agreeable, Neoliberalism has come under heavy fire and for a number of good reasons. Because these policies are imposed on the borrowing countries, many critics consider that Neoliberal economics promotes exploitation by rich nations and restricts a borrowing nation’s ability for self-determination. Moreover, the structural adjustment policies assume a one size fits all reform program for countries that are anything but the same. It is also an economic program that many rich countries do not to follow. In short Neoliberalism has a bad track record and has done more harm than good to the poor nations. As such, the phrase ‘Washington Consensus’ is often used interchangeably with Neoliberalism – and blamed for anything that’s gone wrong in the developing world. Classical Liberalism espouses much of the same policies listed under the Washington Consensus but it differs from Neoliberalism in that a government’s implementation of these policies is self-determined. The selection, timing, intensity, duration and implementation of the reform policies are determined in accordance to a country’s national interests rather than dictated from abroad or with a mission for global endorsement. For a more comprehensive discussion of the definition of Neoliberalism please refer to the following excellent reference: Neoliberalism: origins, theory, definition. [2]

At least in the short run, it is hard to imagine a new Egypt in which government plays a limited role. The economy needs to strike the right balance between achieving its aspirations of prosperity and meeting its social obligations as the nation recovers from the injustices of the past 3 decades. On the one hand the Private Sector and foreign investment is needed to create new jobs, while on the other hand Egypt’s large Public Sector cannot be forsaken and is required to service a country in which 40% live below the poverty line. To ignore either aspect, in my opinion, could spell disaster. Social Liberalism with its Mixed Economy stands halfway between a Market Economy such as Classical Liberalism with limited government and a Command Economy such as Socialism in which the government determines the production, distribution and even pricing of goods through Central Planning.

6 thoughts on “Egypt – Neoliberalism versus Liberalism – are they the same?”